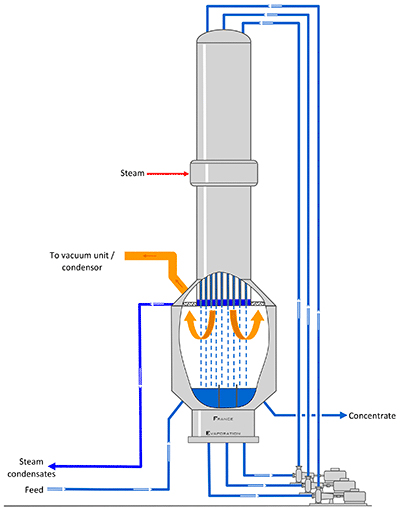 The falling film evaporation technology has several economic and industrial benefits. The capacity of these units can range from 10 k/hr to more than 100 t/hr.

Falling film evaporators are installed vertically installed and have a small footprint. In addition, the separator can be easily integrated into the evaporator to further reduce the floor area used.

The product flows by gravity in the exchange tubes by creating a thin liquid film on the inner walls. By varying the liquid's speed, it is possible to control the thickness of this liquid film and thus reduce the product's residence time.

Pumping costs per tonne treated with a falling film evaporator are much lower than those for a forced circulation evaporator.

The construction cost of a falling film evaporator is lower, notably due to a compact design (separator and scrubber in a single block) and the absence of structural costs.

The falling film evaporator is great for products sensitive to foaming.

It is not recommended on the clogging products, close to crystallization or viscous.

We use cookies on our website. Some of them are essential for the operation of the site, while others help us to improve this site and the user experience (tracking cookies). You can decide for yourself whether you want to allow cookies or not. Please note that if you reject them, you may not be able to use all the functionalities of the site.